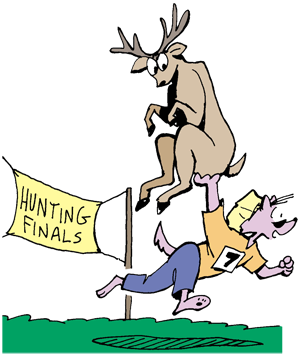 Maybe you've noticed, but self-promotion has never been my strong suit. My motto has always been, "Pay no attention to that man behind the curtain." Look at my strips, look at my characters, don't look at me.

But it’s been pointed out that certain accomplishments of mine haven’t been recognized, especially in regard to “Kevin & Kell.” As the strip celebrates its twentieth anniversary, I've been urged to mention of some of what's notable about it. So here I go.

Of course, many webcomics predate “Kevin & Kell’s” debut on Sept. 4, 1995. Every one of those, however, has (to the best of my knowledge) either ceased or has had significant multi-year hiatuses. None have presented daily content without once missing a scheduled upload.

In 1995 I’d been doing “On the Fastrack” since 1984 and “Safe Havens” since 1988, both with King Features Syndicate. Of course it was natural for those to be available online, which they were along with all of King’s titles. My reason for creating “Kevin & Kell” was to take advantage of something unique to the web: the immediate availability of archives. Since the readers had easy access to earlier installments, longer and more complex stories could be told through the comic strip medium.

This I owe to Doug Pratt, who was the sysop of CompuServe’s Comics Forum in 1995. He sold “Kevin & Kell” to other sysops who needed original content to attract visitors, for $5 a week. At its peak grew to over 50 clients until a change in how CompuServe compensated its sysops made that business model unworkable. Fortunately other income streams arose, which leads us to...

First Webcomic With a Paperback

In 1996 I was approached by David Allen, who inquired if “Kevin & Kell” had been collected into book form. When I said it hadn’t, he asked if he could do it himself. Thus Plan Nine Publishing was born, with its initial offering being “Quest of Content,” the complete run of “Kevin & Kell’s” first year.

Of course, if anyone can present any evidence to the contrary, speak now. Really. Right now. E-mail me at bholbrook1@gmail.com.